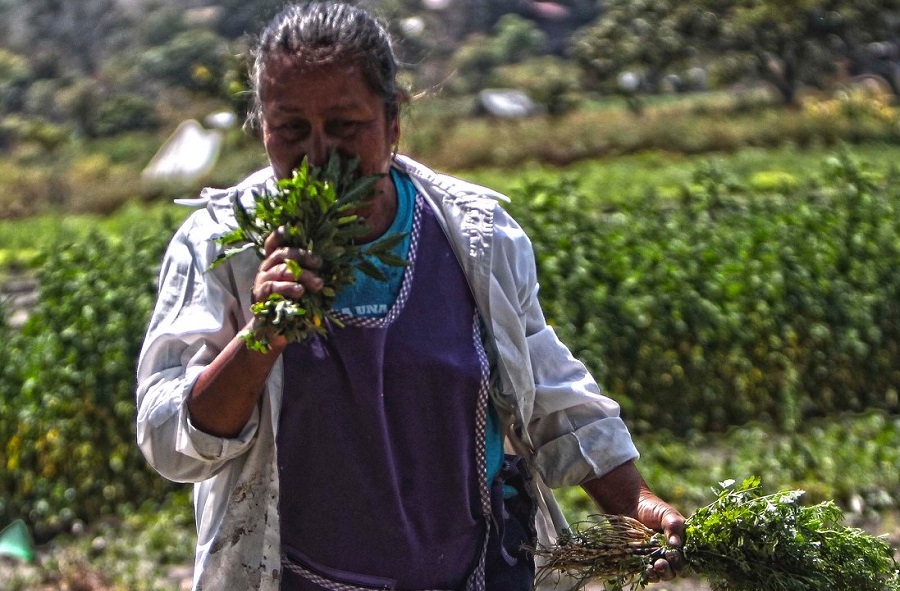 TIXTLA, GUERRERO– Enriqueta García Arcos has just returned from the furrows of her field, where plants of all different sizes grow. It’s mid-day on Sunday, February 21st. The fields she farms, located in smallholding lands in the neighborhood of El Santuario, still look damp. Her feet are muddy, even after trying to remove all the earth.

These plants are all different sizes, and some have just pushed out of the earth. There’s huazontle, epazote, mint, onion, cilantro, radish, cabbage, squash, tomatoes and even tapayola, as the cempasúchil, or Mexican marigold, is known in the region.

On the walk over to the smallholdings in El Santuario, a variety of different shades of green come into view. On one side are the furrows of the tender corn plants, and on the other, nearly at the level of the earth, are the leaves of various plants.

A young woman who popped her head up above a fence between corn plantations, which she was weeding, suggested I continue along the path where the fresh air flowed and which smelled of rich earth in order to speak with Enriqueta. Women’s participation in agricultural production in Tixtla was immediately evident.

The rusted colour of some of the plants stood out in Enriqueta’s field, they were mature huauzontles. She explained that she let them mature in order to use their flowers, which look like little seed balls. She hopes to harvest more of these herbs in the coming days, as Easter approaches. Huazontle is a key ingredient in one of the best dishes prepared during Lent.

When Enriqueta learned that I asked for directions to her fields from a woman who was weeding corn, she immediately said she doesn’t like to plant corn. And her dislike doesn’t come from the fact that in Tixtla flowers and green vegetables are more commonly grown.

When her four children were small, she planted corn to feed them, but harvesting corn is demanding “it’s a big job to pick it, clean it and package it.”

She doesn’t think she has the same strength as she used to. “I’m older now. The elote [corn cob] –which is what is most sold in Tixtla– is heavy, you have to carry it and you have to cut it early, if I cut it [in the afternoon] I can’t sell it the next day, because it hardens, it has to be recently cut.” But in reality her lack of strength is a matter of perception: she gets up every day before 5am to sell her harvest in the market, over the course of the day she goes to her fields twice, and she takes care of domestic work at her home.

She’s 58, and has dedicated the last 28 to farming. She began farming with her husband, Joel Tlalmanalco López, after they returned from Mexico City, where they lived for a period.

What Enriqueta knows about farming she learned from her mother in law, Gonzala López Jiménez. In El Paraíso, the town in Chilapa where she’s from, her parents farmed corn, little by little she got more involved, though, she says, “there they only plant during the rainy season.”

Here in Tixtla she grows her crops year around, in rainy or dry periods, if she’s not growing vegetables she grows flowers. On Sunday, together with her husband, she watered half a hectare, of the three quarters of a hectare they rent to plant and harvest.

Enriqueta keeps the tips of her mother-in-law in mind: to harvest radish, which is born and grows hidden in the earth, the leaves tell everything. “She told me what it would look like when it was ready,” she said.

She already knows what she’s going to pick later for tomorrow’s sale. On Monday the 22nd, she’ll bring some radish, cilantro and squash to the market.

Women of Tixtla, more than farmers

Even having watered the plants, this is an easy Sunday for Enriqueta, because she didn’t get up at dawn to go and sell in the market. Over the last months, she’s only been going to sell every third day.

Yesterday, the ‘contractors,’ as the intermediaries are called, bought squash, tomato, mole leaf and cilantro she picked on Friday. That is why she got up at dawn. The night before, she didn’t sleep until she divided up all the herbs and separated the vegetables.

On market days she might meet Rosario, Mary or Lucía, who farm other smallholdings and also sell what they produce. Lucia is the one who finishes her day first, because she starts her day in the market selling epazote at 2am, waiting for the employers who will bring it to Chilpancingo, the capital of Guerrero state, about 30 minutes away.

Or she might meet with Rosa, Rufina or Romana. Or some of the flower growers, like Patricia, Moni, Esther, or Celia. Enriqueta also sells flowers but usually only in certain seasons, like the celebration of Day of the Dead or on Mother’s Day. Tapayola is the only flower she grows year round.

If these women don’t meet in the fields, they meet in the market. Sometimes some of them will sell directly to their regular buyers in the markets, other times they buy or trade with other farmers.

Enriqueta is clear about that: “we all participate.” She’s talking about the many jobs related to farming: planting, harvesting or picking, packaging, selling, preparing food and doing other tasks at home, which may be considered outside of the agricultural process, but are essential in making it happen.

“But you [the women] do the same work as [the men], or more,” I said to her, when I noticed that her husband had taken some distance from us.

“Yes. Sometimes we fight: ‘Well, when are you going to make me coffee? I’m going to sit here, it’s your turn now. I get tired too, if we’re not dancing,’” she tells her husband.

A little earlier, I said loudly that women do more work while they’re at work, and her husband responded “yeah, everyone.” Later, though, without prompting, he commented that the work women do in the fields is the most important.

Enriqueta said that fortunately her two sons still live at home. Juan Carlos and Juan Armando are different, because they help in the fields (even though they don’t enjoy it) and with cleaning at home.

There’s no doubt about Enriqueta’s contribution to the farm.

“What is a normal day like for you?” I asked.

“I get up, I go to the market, I come back, we eat, I get lunch prepared and leave it ready, and I come [to the fields]. From here I go back around three. We used to make tortillas and do the nixtamal, now I just buy the tortillas because I don’t have time. I finish cooking, we eat and then we come back [to the fields] around 5pm.”

Enriqueta finally gets home around 7pm, that’s when she has to ready all of the products she harvests for sale.

How important are women in farming in Tixtla? The question answers itself.

The women know that in rainy periods, onions don’t grow. “It goes straight, it doesn’t make a ball.” Her and her husband don’t plant onions from July to October, during the rainy season.

They start seeds for pachole in the ground in January. Even when they use hybrid seeds, planting is done manually. The pachole are seedlings –they measure about 10 centimeters– which grow from the seed about a month after planting. They are “baby plants,” as her granddaughters call them whenever they come and play in the fields.

Later, the small plants are transplanted in larger furrows, ensuring distance between one and the next. After another month and a half or two months, you can harvest, as she explains.

Onion, cabbage, tapayola, lettuce, tomato and mint are all grown this way. Radish, cilantro, huauzonetle, epazote, green beans and papalo are planted directly in the ground.

Of all these plants, Enriqueta has three crops she prefers at the moment of harvest: onions, lettuce and cabbage. They are the easiest to pull up from the ground. It was at this moment that she insisted her strength isn’t what it once was, but every day for the last 28 years, she’s been doing this.

Enriqueta had a very good teacher: Gonzala, her mother-in-law, who passed away about five years ago. She kept going to the fields “until she couldn’t anymore.”

Apart from paying attention to the language of the radish leaves and the rest of the harvest, she taught her what size the portions of herbs and vegetables for sale should be.

She also brought her to the market to watch how she negotiated with the employers, until the moment of transition came. “Later she would say: I still wish I could go sell,” says Enriqueta.

Gonzala had five children, one of them was Enriqueta’s husband, and he’s the only one who works in the fields. In the smallholdings of Tixtla, Gonzala’s legacy remains, and Enriqueta, without pretensions, is dedicated to preserving it.

This report was originally Published in Amapola Periodismo Transgresor, which is part of the Media Alliance organized by Red de Periodistas de a Pie. You can read it here.